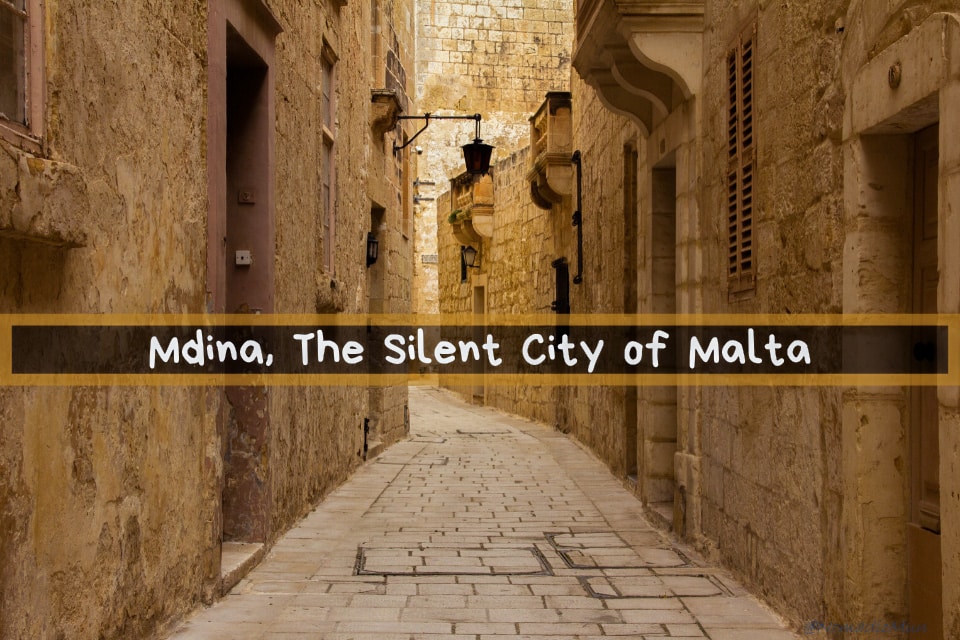 ’Mdina- The Silent City of Malta’- the name itself is mysterious. This old fortified city with only 300 populations  is a different world. Once you enter the city through the main gate you are already in a different era leaving behind the current world. Cobblestone street, narrow alleys, medieval buildings make it mysterious.  No car (except few special cases) is allowed inside the city. Visitors are expected to adhere to the noise restrictions in this ‘Silent City’.

Mdina was founded around 800 BC by Phoenician settlers as known as “Maleth”. It was later renamed as Melite by the Romans.  Ancient Melite was almost double in size than current Mdina. During latter period, the city adopted its present name, which is derived from the Arabic word “Medina” meaning fortified place. The city remained capital of Malta throughout the Middle Ages till 1530. It  was declared as UNESCO World Heritage Site in 1998 . Nowadays it is a popular tourist destination and commonly known as ‘The Silent City in Malta’.

Mdina is believed to be one of the most haunted places in Malta. There are several stories related to haunted nature of Mdina. Most common and popular story is about Mdina’s headless bride.

According to the story…

A beautiful girl, named Katerina who lived in Mdina was attacked by a knight on a dark street at evening time. Trying to save herself, she accidentally killed the knight. As a result, court sentenced her to death by beheading,  but not before allowing her to marry her one true love minutes before her punishment was executed. It is said that the headless bride still roams the streets of Mdina, standing silently at the end of the streets, encouraging people to follow her and appearing in their holiday snapshots. It’s also said that she appears to widowers and heartbroken men, telling them to give up on love and join her in death.

Without knowing the fact/story , we visited (for the first time) Mdina on a rainy evening.  Narrow lane, dim light, deserted street –created a supernatural atmosphere.  Though it was a short walk, It was indeed a different experience.

What to see in Mdina

We returned to Mdina on next morning. this time fully equipped with related stories. The deserted alleys are taken over by tourists. It was impossible to relate it with the experience we had from previous evening. A day is more than enough to visit major attractions in the city. For sure, the tiny city has everything in store for history mongers. Few of Mdina’s major attractions are…

1.The Silent City itself

There are few places where you don’t need any exact point of interest to visit, the whole area itself is something to behold and experience. Mdina is exactly the same. Stroll along cobbled streets and admire architectures. The cobbled street, medieval houses, narrow alleys will take you back to the medieval era.

St. Paul’s Cathedral, one of the popular landmark, is visible throughout central Mdina. The 12th century built cathedral was severely damaged by earthquake in 1693. Then it was dismantled and rebuilt in 16th century in the Baroque style by the famous architect Lorenzo Gafà. The cathedral is now one of the National monuments of Malta and main tourist attractions of Mdina.

The Cathedral Museum, established in 1897, is one of the most outstanding religious museums in Europe. A small chapel on the second-floor exhibits church vestments.

Bastion Square, situated in north-west corner of Mdina, is one of the most popular squares in Mdina. It provides an excellent panoramic view of North-east Malta. Good for a quick peek or for a quiet spot to enjoy the silence and view on a summer’s night.

5. The National Museum of Natural History

The National Museum of Natural History is one of the most popular tourist destinations in Mdina. It is situated in Vilhena Palace.This palace, designed in baroque style, itself is a commanding building of 18th century. This museum exhibits thousands of rocks, fossils and minerals alongside birds, insect and shell. Mammals and marine creatures are also exhibited here.

Palazzo Falson, mainly known as the Norman House, was built in 1495. This mansion is one the best-preserved buildings of Medieval era in Mdina. It was occupied by the first Grand Master in Malta, Philippe Villiers de L’Isle-Adam when the Knights of Malta arrived in 1530. Now it is a museum, opened to public. You can take a self-guided audio tour around the mansion. It offers real sight into the aristocratic lifestyle of  Maltese nobility.

Mdina Main Gate is one of the most popular tourist attractions in Mdina. It was recognized as ‘King’s Landing Gate’, shown in popular series Game of Thrones. The gate  was built in 1724 and is decorated with double pilasters, the coats of arms of Grand Master António Manoel de Vilhena and the city of Mdina, a trophy of arms and a Latin inscription reading. Statues of growling lions, holding the coat of arms of Vilhena or the town of Rabat stand in the front of the gate. Once you enter through the gate you will find yourself in a different world.

The Carmelite Priory, one of the most important religious buildings in Mdina, built in the 17th century. It is still a functioning monastery and the only priory in Malta open to the public. Visitors can participate in daily prayers, Mass, and meditation services or take a guided tour. It also hosts cultural activities, such as lectures, meditation classes, and retreats, throughout the year.

The Chapel, a tiny place of worship is a Roman Catholic Church. Though original structure was built in 1417, it was reconstructed in 1693 after an earthquake destroyed it. It is decorated with painting of Saint Agatha in a gilded frame on a beautiful altar. The chapel was a shelter for refugees during the Second World War.

The gate, located near the southwest corner of the city, was originally built in the medieval period. It is named on a small Greek community, once lived close to the gate. During old days slaves were allowed to enter the city only through this gate.

Mdina’s ditch was an important part of its fortifications. You can enter the ditch from the parking area at Greeks Gate.  It was first created in the 15th century and upgraded transformed into a quality garden in recent years. Ditch Garden was shortlisted for this year’s European Garden Award in 2013.

Things to do in Mdina, Malta

Roam: Just stroll along the cobbled street of Mdina and get lost in time.

Guided walking tour: Mdina is enriched with history. Every architechure, building in Mdina has its own history . It is recommended to take guided walking tour for better understanding of popular sites.

Explore Museums and Audiovisual Shows in Mdina: There are several museums to explore. Most commons are Chathedral Museum, The National museum of Natural History, Palazzo Falson Museum, Carmelite Priory, Tools, Trades and Traditions Museum, The Mdina Dungeons Museum, Palazzo Santa Sofia museum, Torre dello Standardo. You can enjoy audiovisual shows like ‘The Knights of Malta,’ ’Tales Of The Silent City’ (in Palazzo Gatto Murina) in Mdina.

Visit Rabat and Catacomb:  Pay a visit to Rabat, the neighbour-village of Mdina. Rabat center is only 5 min walk away from the main gate of Mdina. Collegiate Church of St Paul and Catacomb of St. Agatha are two of the most popular tourist destinations in Rabat.

Book Ghost walk at night: Several agencies in Malta offer Mdina Ghost Tour. If you are looking for something different but interesting this is for you. 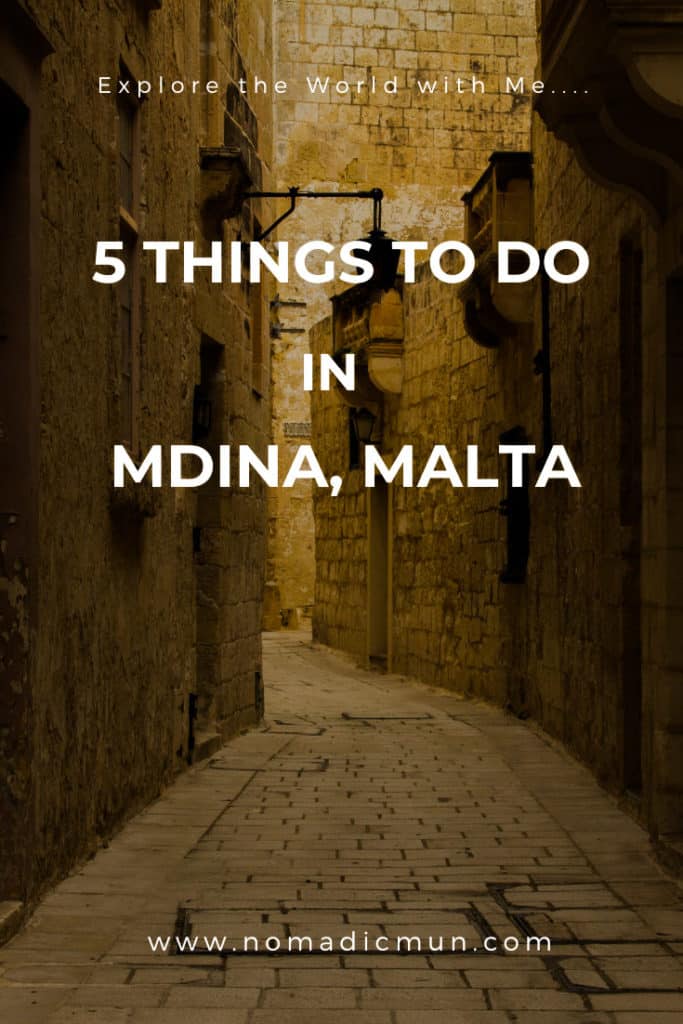 A Traveller with Nomadic soul.

Hi!! This is Moon, a traveler with the soul of a nomad. Follow me on social media

This website uses cookies to enhance your browsing experience while you surf through the site. Out of these the necessary cookies are stored on the browser as they are necessary for basic functionalities of the website. We also use 3rd party cookies which help us analyze user behavior. The cookies will be stored in your browser only with your consent. You have the option to opt-out of these cookies. Though opting out of some of these cookies may have an effect on your browsing experience.
Necessary Always Enabled
Necessary cookies are absolutely essential for the website to function properly. This category only includes cookies that ensures basic functionalities and security features of the website. These cookies do not store any personal information.
SAVE & ACCEPT